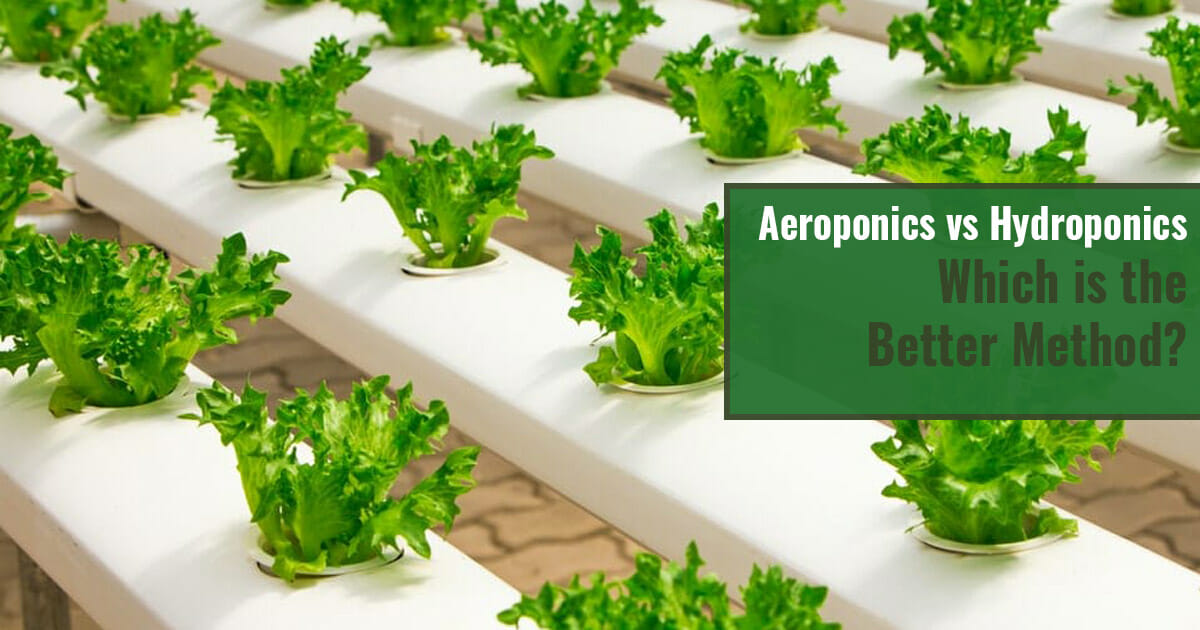 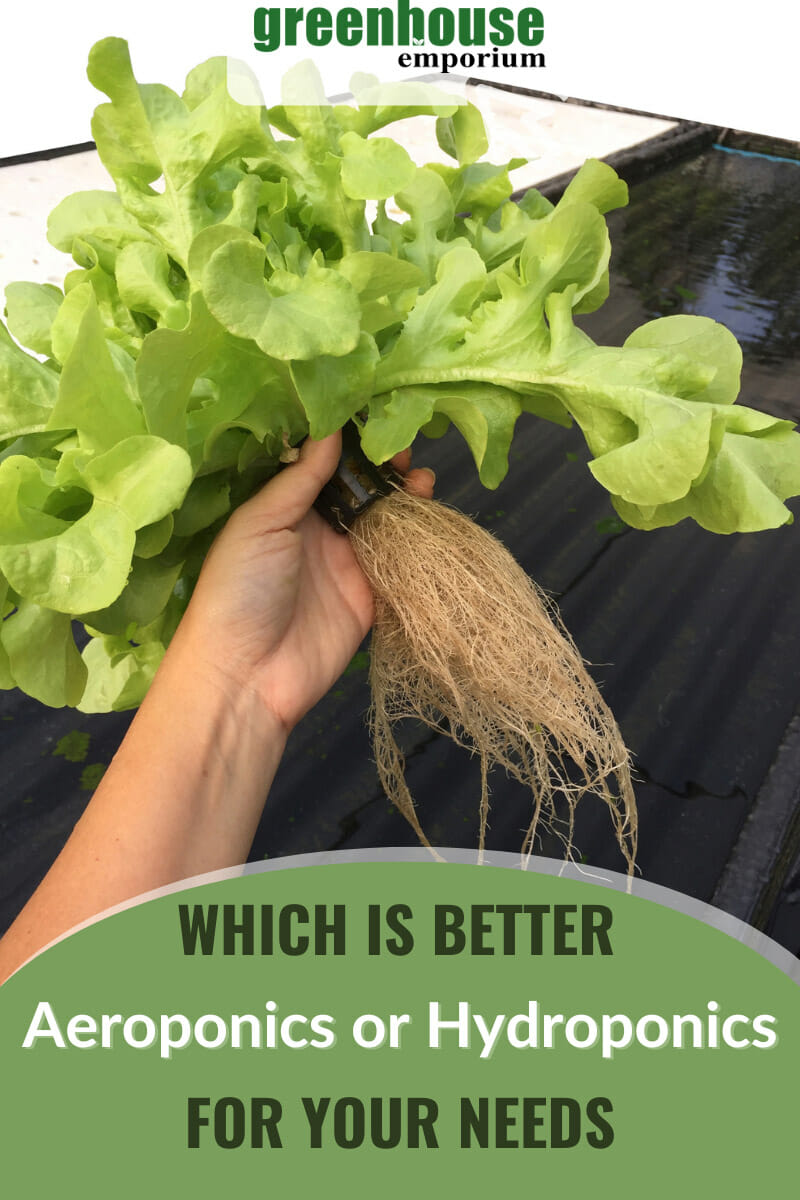 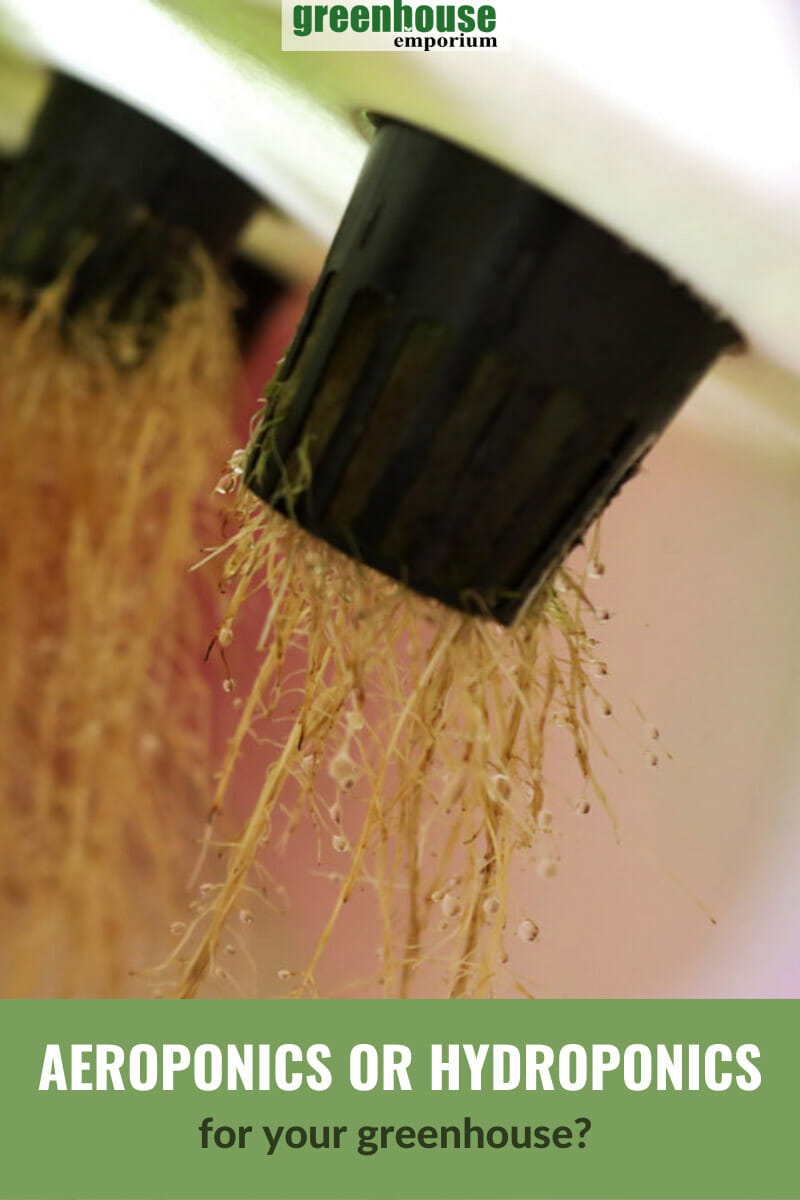 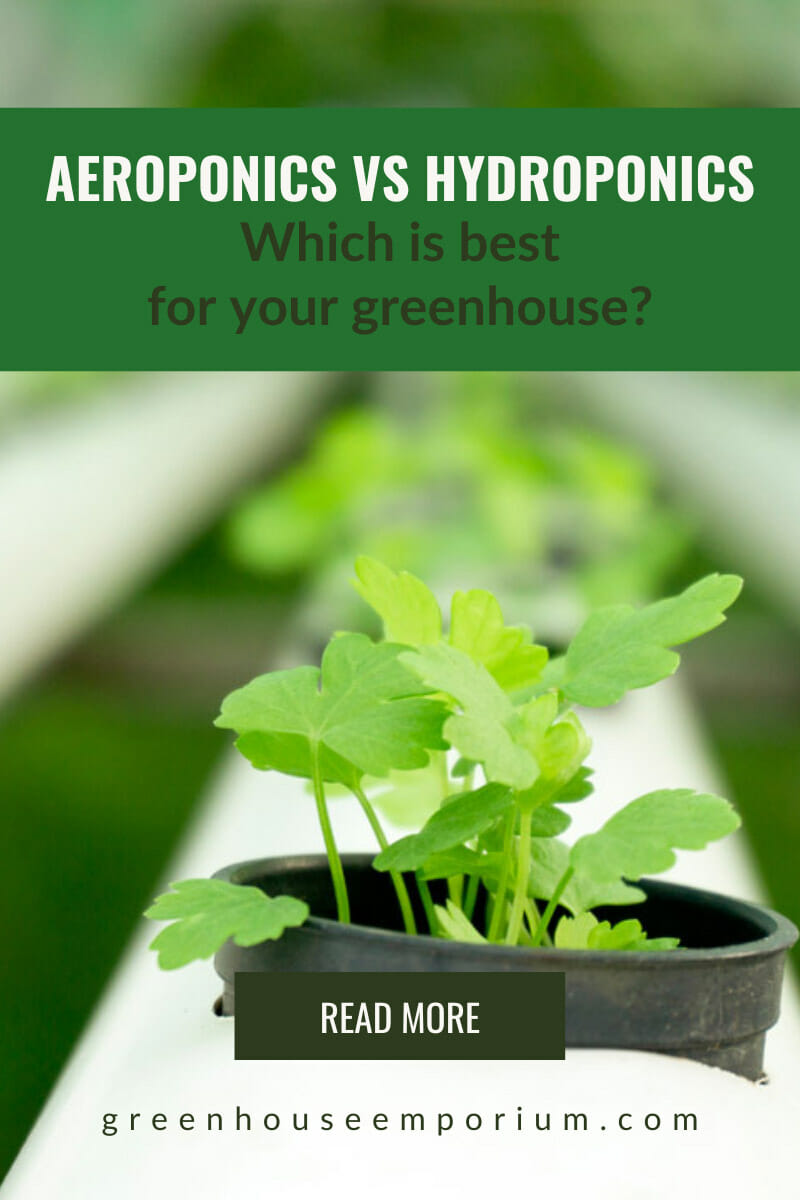 What do you picture when you think of gardening? Most likely you envision a variety of plants growing out of dark, loamy soil. While many plants are grown this way, people are increasingly turning to non-traditional growing methods to grow plants, especially in places where traditional methods struggle.

Both aeroponic and hydroponic growing systems are soilless growing systems that can be set up anywhere, including your greenhouse! Both systems have numerous benefits, including increased yields, healthier plants, and less water consumption. However, the two systems have a few key differences such as cost and required expertise.

If you’re looking to grow plants non-traditionally and sustainably, you should look no further than a hydroponic or aeroponic system. But which system is better overall and better for your situation? Keep reading to find out!

Why grow plants without soil?

Up until recently, it was thought that you could only grow plants the way that they appear in nature: from the soil. But modern technology, research, and innovative farmers have proven that there are many ways to grow plants unconventionally: indoors, on rooftops, vertically, with fish, and even in nutrient-rich water.

The ability to grow plants in unconventional spaces and without soil provides an opportunity to grow food where traditional farming might be unreasonable. For example, urban spaces suffer from a lack of access to local produce, and some land is becoming more difficult to farm due to the effects of climate change and over-fertilization. In addition, a recent WWF report indicated that indoor soilless farming can help reduce soil erosion, food loss, and pesticide use.

Which is better? Aeroponics vs hydroponics

Aeroponics and hydroponics are similar systems developed to offer sustainable alternatives of growing food. With either method, crops can be grown indoors anywhere, without the need for vast tracts of land. Using these systems, plants are grown without soil, with less water, less machinery, and fewer pesticides.
Both aeroponics and hydroponics increase yield and promote faster growth, mainly because the plants’ roots don’t need to spread far to gain essential nutrients. Instead, all their energy is directed toward growth.

The biggest difference between these two growing methods is how the plants are watered. Plants in hydroponic systems are suspended in nutrient-rich, aerated water, whereas in aeroponic systems the plants’ roots are regularly misted. But is one system better than the other?

In aeroponics systems, plants are grown without soil in closed containers either vertically or horizontally. The roots are suspended either in air or an aggregate medium and sprayed regularly with a fine mist. The water is mixed with a controlled amount of nutrients to make up for the lack of soil.

Because the plants’ roots are suspended in air, they receive all of their nutrients via misting. This makes it easier for the roots to get all the oxygen they need without any oxygen pumps or bubblers.

Aeroponics systems are known to be extremely water-efficient. Because the plants are misted, and not continuously submerged in water, aeroponic systems use significantly less water than other systems, including hydroponics. Additionally, aeroponics systems are closed-loop systems, so the water and even the nutrients can be recycled indefinitely.

Stable temperatures are necessary to keep humidity levels high for both the plants and their roots. High humidity prevents the roots from drying out and water from evaporating too quickly after misting.

Maintaining stable temperatures may be difficult if you have extreme seasonal weather changes in your local area. Keeping a high humidity level is usually not a problem in a greenhouse since it’s always more humid.

2. Not immune to pests and diseases

Routine misting keeps humidity high, but can also create puddles on your workbenches and floor. This can lead to your greenhouse becoming susceptible to various pests that feed on algae, like shore flies and fungus gnats.

To reduce the risk of disease or pest infestation, it’s important to perform routine cleaning on the system and greenhouse.

3. More difficult to DIY in a greenhouse

If you do want to set up an aeroponic system in your greenhouse, you’ll need to ensure the greenhouse is enclosed. You’ll also need to get opaque containers that suspend the plant roots in darkness and finally install an aeroponic-specific misting system.

Since watering is controlled by a timed mister, electricity is needed to maintain the system. Power outages may cause your plants to suffer if the watering stops for too long.

Hydroponic systems are similar in that they also involve growing plants without soil, but there’s one key difference. Instead of being misted regularly, plant roots are submerged in water. The water has nutrients added to it and is aerated using pumps or air stones to make sure the roots receive all the oxygen they need to grow.

Once established, hydroponic systems can be relatively low maintenance. You’ll need to replenish the water solution with more nutrients as needed. Depending on the amount of plants, their size, and the watering trays, this is usually about every 2-3 weeks.

2. Cheaper and easier to DIY

Using a hydroponics system can eliminate many common greenhouse pests. However, your plants will still be susceptible to waterborne diseases. Pythium, which attacks the plant roots, is the most common. It can be prevented with routine cleaning and water replacement, but isn’t entirely avoidable with hydroponic systems, especially when the water is recycled.

Painting your water trays white or adding reflective materials to your greenhouse can help keep the water cool when temperatures rise.

Another difference between hydroponics and aeroponics is that hydroponics requires slightly more water and nutrients to sustain the plants. This can make the running costs slightly more expensive. To fill the tanks, it’s estimated that you’ll need at least 4 times more nutrients and water than aeroponic gardening.

Water pumps are essential for hydroponic gardening to ensure your plants get the oxygen they need. A slight disruption to the oxygen levels in the water can be detrimental to your plants. You’ll need to be mindful of power outages and have measures in place to protect your plants in the event the power drops for a long period.

Which is more expensive? Aeroponics vs hydroponics

It’s clear that neither aeroponics nor hydroponics is entirely cost-free. Not only do they require an initial cost to set up the infrastructure, but they have ongoing costs such as electricity, water usage, nutrients, and cleaning costs. That said, greenhouse gardening is never completely free of cost, so whether or not one of these systems is right for you depends on your budget.

Both aeroponics and hydroponics have their expenses, which vary depending on the size of your greenhouse and how many plants you want to accommodate. Typically, however, hydroponic systems are less expensive to install than aeroponics.

First, for a simple hydroponic system, you only need to install water trays, an air pump, and a means to suspend your plant roots over the water. On the other hand, an aeroponic system requires a carefully enclosed environment with an internal misting system, as well as the technology to keep the temperature stable. This kind of setup is difficult to DIY and is best bought from a supplier, making the initial cost much higher than a DIY hydroponic system.

However, it’s also important to consider the resources needed to manage either system long-term. An aeroponics system might be more expensive to install, but it’s often cheaper to run. It uses less water, fewer nutrients, and can yield a better crop. And while a DIY hydroponics system is cheaper to set up, you can also purchase a manufactured system which may not necessarily be cheaper than an aeroponics one.

Can you install aeroponics or hydroponics in a greenhouse?

While aeroponics and hydroponics are often shown as solutions for indoor or urban farming, they can absolutely be installed in a greenhouse! Both systems do require some dedication to set up and maintain but can prove beneficial for greenhouse growing.

Which solution is best for you – aeroponics or hydroponics – ultimately depends on your greenhouse, your budget, and how much maintenance you’re willing to do.

You’ll recall that having an aeroponic system in your greenhouse will require an airtight environment with high humidity. You’ll also need to have a misting system set up to routinely mist the roots, which can be difficult and/or expensive. However, because it uses less water, the ongoing running costs could be cheaper.

Alternatively, a hydroponics system can be much easier to set up at home as a DIY project. It’s easy to find and install water trays, a suspension line, and air pumps. But these systems use more water and nutrients to keep the plants alive.

Which one are you going to choose for your greenhouse? Tell us in the comments! 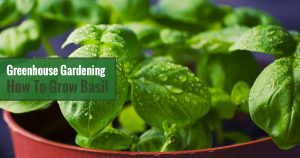 How To Grow Basil In A Greenhouse 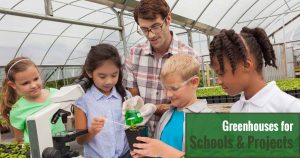 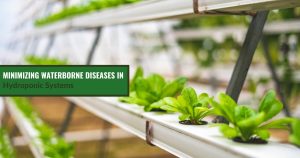 How To Prevent & Control Waterborne Diseases in Hydroponic Systems